Centre for Excellence in Project Management (P) Ltd. having the brand name CEPM is India’s oldest and foremost Training and Consulting company that offers a wide range of project management related services. With 650+ clients CEPM has spearheaded the dissemination of project management across India with support from Government, industry, associations and leading professionals.

CEPM is the first company in India to propagate the concepts of scientific project management.

IN LAST 30 YEARS CEPM HAS CREATED MANY FIRSTS

In 1998-99, CEPM evolved a most unique and comprehensive maturity model to assess and measure the Organisation’s Project Management Maturity (CEPM-OPMMA) which was developed  by the globally well known PM expert, Adesh Jain, who was then Director In-Charge of CEPM who had 30 years of industry experience having worked in North America and India. Model is more comprehensive than ProMMM and most suitable for Indian companies especially Indian CPSE’s. Has carried out assessment for leading companies like –  IPRCL, NBCC and HSCC.

The model has 6 levels and checks 18 separate attributes to assess the maturity and was further developed over the years. The levels from lowest to highest are: ADHOC – RITUAL – COMPULSIVE – LEADERSHIP –  VISIONARY –  PASSION.

Human Capital Management Maturity Model (CEPM-OHCMMA) – this maturity model is a breakthrough model in addressing and measuring the maturity of human aspects in the organisation. It is applicable to industry in general and in specific to Indian CPSEs.

CEPM’s OHCMMA model is an improved assessment model than P-CMM which is primarily meant for the software industry. CEPM was awarded the assignment by HSCC to assess their organisation’s Human Capital Management Maturity. This unique award based on 100% objective assessment was launched by CEPM in 2018 as a national competition and as an International competition in 2020 with national and global teams USA, Germany, Canada such as Siemens, Tata Motors, , NITI Aayog, NTPC, IOC, GAIL, HFCL, NBCC, IGL, BEML, DMICDC, BDL, Northeastern University, USA, IIT Delhi etc. 2018 PMTEA Winning Team from NTPC-Kudgi, sitting in front with the National Trophy along with some other participants and TKA Nair, Former Advisor to Prime Minister of India, SK Roy, Director (Projects), NTPC, Adesh Jain, Chairman i2P2M and the Award Director and Ms. Ruchira Jain, MD, CEPM who is on left.

In 2016 we became the Indian partner of Prendo Simulations of UK which a world renowned leader in project simulation programs that provide excellent learning to participants where they have to make complex decisions in managing the projects. 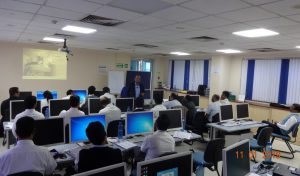