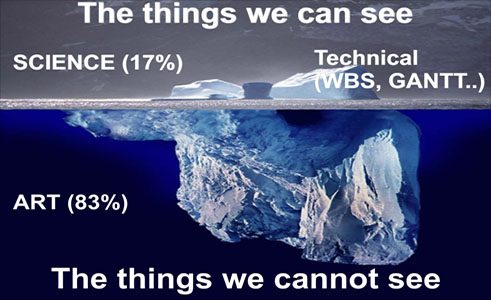 The very first International Conference on Project Management held in India was organized by me in December 1992 in New Delhi and was held in association with the United Nations Development Program (UNDP) on the theme ‘New Dimensions in Project Management’.

In the opening address at this conference, I presented the following definition of project management:

It is the Art part or the softer dimension of human factors where the arguments and conflicts generally arise. Most of the things on which conflicts occur are related to Human behavior which is a complex phenomena to understand. These are things we cannot easily see and measure and they often constitute the major difficulty in TEAM Building.

In the schematic, the Science part is easily visible whereas the behavior or the Art part is not apparent and directly visible. The hidden agendas of individuals makes it difficult to resolve differences and it certainly increases the conflicts in a project as it is difficult to predict what is going on in one’s mind.